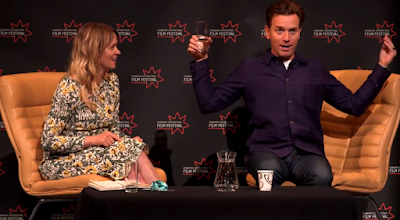 Ewan McGregor attended the Edinburgh International Film Festival today to promote his upcoming film Last Days in the Desert and participate in a special event to discuss his career. During the discussion, the actor touched on his role of Lumiere in Beauty and the Beast, including his struggle to sing with a French accent. GEEKchocolate magazine attended the event and detailed McGregor's discussion with the sold out audience.

On Beauty and the Beast:


Having recently completed Beauty and the Beast for Disney, he struggled to sing in a French accent despite having a French wife and four bilingual children, though he described his time on set with Emma Thompson, Stanley Tucci and Sir Ian McKellen as "fantastic fun."

Read the full recap below.


Screen Daily also shared a recap of the event with a few more details about McGregor's time working on Beauty and the Beast.


McGregor has also been filming the part of Lumiere in Disney’s Beauty & The Beast directed by Bill Condon “I liked it very much; it’s mostly sound work with animation.” There were about three days of shooting live-action alongside a cast including Emma Thompson, Stanley Tucci and Ian McKellen, “We all had a great time.”

The actor enjoyed recording the song “Be Our Guest” for the film, even if he was joking that his French accent wasn’t up to snuff. “I had to do a French accent. I’ve lived around a French accent for 20 years [his wife is French], but I couldn’t do it – I sounded Mexican,” he said with a laugh and a quick impersonation.

From Thompson on Hollywood:


Currently in production and due for a 2017 release, Bill Condon’s live-action remake of Disney’s “Beauty and the Beast” (1991) will feature the Crieff-born actor as Lumiere, the Beast’s servant and singing candelabra.

It’s fourteen years since McGregor starred and sang in Baz Luhrmann’s “Moulin Rouge!”, and he found the process this time around terrifying. “I’d forgotten how scary it is. You’re standing alone, and behind this glass there’s forty people. That was quite tricky. After that I went away and really got to work on my French accent.”

The Edinburgh International Film Festival released a short video of highlights from McGregor's "In Person" event. Beauty and the Beast is mentioned around the 1:10 mark.


From the Irish Examiner:


The Scottish star has signed up to play singing maitre’d-turned-candalebra Lumiere in Disney’s live-action remake of Beauty And The Beast.

He revealed: “I got to sing Be Our Guest, which is a wonderful song to sing – in a French accent, which is not as easy as it sounds. But it was fun, yeah, I really enjoyed it.”