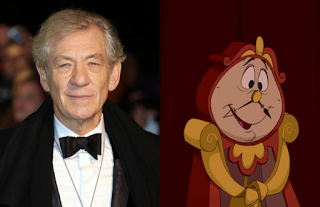 With Mr. Holmes coming to theaters this summer, star Ian McKellen has begun promotion for the film and naturally his next collaboration with the director made it into the conversation. In a recent interview with BBC Radio 2, McKellen briefly discussed his role as Cogsworth in Beauty and the Beast.


"I play a clock. And my name is Cogsworth. And I get to sing. I'm sorry I'm not allowed to tell you what I sing. It's terribly exciting!"

Beauty and the Beast marks McKellen's third collaboration with director Bill Condon. The pair previously worked together on Gods and Monsters and Mr. Holmes. Disney's Beauty and the Beast, which is currently filming in London, is set for release on March 17, 2017.

Source: BBC Radio 2 via The Washington Post
Posted by StephanieB at 1:17 PM