"Meet the Actor" with Ian McKellen now available on iTunes 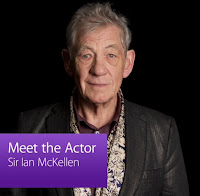 Ian McKellen recently appeared at the Regent Street Apple Store in London to take part in the "Meet the Actor" series and discuss his role in Mr. Holmes. While the event mostly focused on the upcoming Sherlock Holmes film, McKellen also discussed reuniting with director Bill Condon, Lord of the Rings, Shakespeare, and Beauty and the Beast.

The discussion about Beauty and the Beast begins around the 13:00 mark and the actor even breaks out into song with "Be Our Guest" and "Beauty and the Beast." In addition to McKellen serenading the audience, he also talks about singing with Ewan McGregor (Lumiere) and Emma Thompson, who, according to McKellen, plays a teapot "very convincingly" and has "a beautiful voice." He also briefly mentions Emma Watson, Dan Stevens, and Audra McDonald before the conversation turns back to Mr. Holmes.

Click here to listen to the podcast of the event.

Posted by StephanieB at 6:37 PM