Happy Anniversary to 'Beauty and the Beast' on Broadway 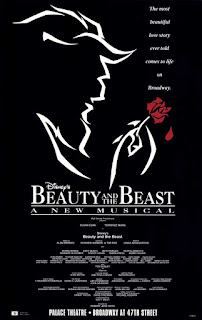 It is a big year for Beauty and the Beast with the live-action film less than a year away and the animated classic celebrating its 25th anniversary in November. Also celebrating this year is the Broadway production, which debuted 22 years ago today on April 18th, 1994 at the Palace Theater. The show, which also played at the Lunt-Fontanne Theatre, ran 13 years for a total of 5,461 performances. Beauty and the Beast marked Disney's first Broadway outing and was followed by productions of The Lion King, The Little Mermaid, Mary Poppins, and Aladdin, which is currently playing at the New Amsterdam theater in New York City.

The Broadway production saw the return of two key members of the animated film's production team, composer Alan Menken and screenwriter Linda Woolverton, who penned the book for the theatrical production. Menken teamed with lyricist Tim Rice, with whom he worked with on Aladdin, for new songs for the stage production. The song "Human Again," which was originally intended for the animated film and has since been included on DVD/Blu-ray releases of the film, also found a place in the Broadway production. The musical's creative team also included director Robert Jess Roth, choreographer Matt West, and costume designer Ann Hould-Ward. The show's original cast included Susan Egan as Belle, Terrance Mann as the Beast, Burke Moses as Gaston, Gary Beach as Lumiere, Heath Lamberts as Cogsworth, and Beth Fowler as Mrs. Potts.

Since its Broadway debut, Beauty and the Beast has enjoyed runs in more than 30 countries and has grossed over $1 billion worldwide. Some productions of note include the 1997 West End production, which won the Olivier Award for Best New Musical, and the 1995 Australian production, which featured Academy Award nominee and Tony Award winner Hugh Jackman as Gaston (click here to listen to Jackman sing "Me"). And speaking of the handsome brute, Alexis Loizon, who played Gaston in the 2013 French production, will appear in the upcoming live-action film as Stanley ("You can ask any Tom, Dick or Stanley..."). Such fun!

Below are a few interesting videos, including a behind the scene look at the Broadway production hosted by Robby Benson (voice of the Beast).

Backstage Pass: Disney's Beauty and the Beast Goes to Broadway

Beauty and the Beast on Broadway

Posted by StephanieB at 2:44 AM