By now you have watched, re-watched, and examined the new Beauty and the Beast live action sneak peek enough to teach a semester-long course on the less than minute long video. The clip was amazing for a number of reasons, but at the top of the list was getting to see just a glimpse of the table read that took place last April in London.


Our first look at the cast was actually a photo shared by Josh Gad (Le Fou) from that fateful April day and the actor also spoke about the event with IGN last August (see the full interview here).

However, no one has come close to igniting fans' excitement quite like Ian McKellen (Cogsworth). In a post shared on Facebook (and now his own website), McKellen described the atmosphere of the room where the cast, director, crew, producers, and executives gathered to once more begin telling a tale as old as time.


Today Beauty and her Beast (Emma Watson and Dan Stevens) read with their supporting cast: and a happy reunion it was for me, next to Mr Holmes' "Lady in Grey" (Hattie Morahan) along from Bard the Bowman (Luke Evans) and Kevin Kline, who I haven't seen since we received our Tony Awards together in 1981. The cast were seated 'round four long trestle tables placed in a square. In the middle on their own little stage there was a large clock and a feather duster and a candelabra, who all remained static throughout the morning. Elsewhere, everything and everyone was alive and even kicking, high-kicking too. Bill Condon had decided to put on a show and I've never seen or heard anything like it.

With the release of the clip from the table read, McKellen revisited his words from last April and also shared a seating chart from the table read. Most of the cast in attendance are easy to identify in the clip, but the chart reveals a number of other members of the film's creative team. On one side of the table you can find composer Alan Menken and lyricist Tim Rice alongside costume designer Jacqueline Durran and many others. And just on the edge of the frame, you can make out director Bill Condon. 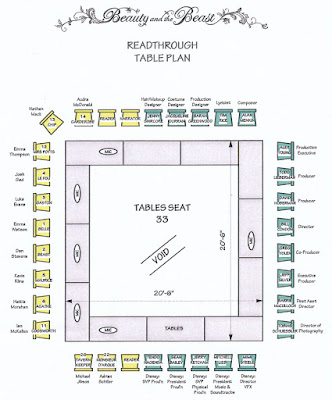 Email ThisBlogThis!Share to TwitterShare to FacebookShare to Pinterest
Labels: behind the scenes, Ian McKellen