Are you sitting down? No? Well, you might want to before taking a peek at eight new images from Beauty and the Beast. The new images are courtesy of Entertainment Weekly, which will also feature Belle and Beast on the cover of this week's issue. 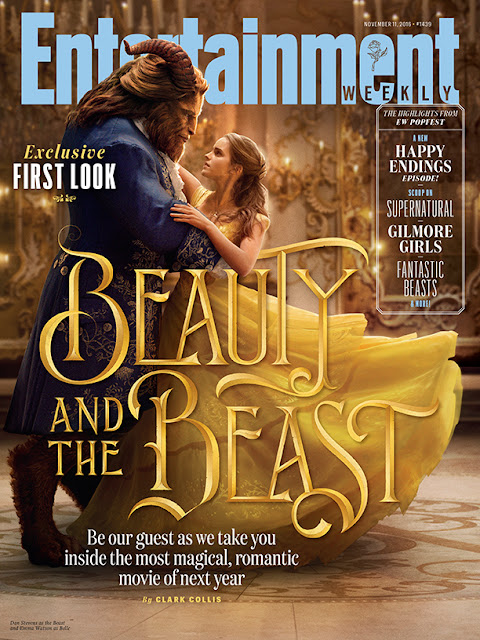 Once upon a time, there was a little girl named Emma Watson who really, really, really loved Disney’s 1991 animated classic, Beauty and the Beast. “I can’t even think how many times I watched it as a child,” says the former Harry Potter star. “I knew all the words by heart. I knew all the songs by heart.”

For this week’s cover story, EW visited the film’s U.K. set and spoke with all of the above, as well as director Bill Condon and costume designer Jacqueline Durran, who talked about creating the new version of the iconic yellow dress Belle wears in the original film’s ballroom scene. In addition, we chatted with Ewan McGregor, who voices the enchanted, “Be Our Guest”-performing candelabra Lumière, and Sir Ian McKellen, who plays the clock Cogsworth and was apparently desperate to get his own big production number. “I kept singing what I thought would be a rather good addition to the score,” says the X-Men franchise star. “‘My name is Cogsworth!/ And I’m a clock!/Ticktock!’ But I didn’t get my own song.”

Readers can also find out about the film’s new songs — penned by Alan Menken and Tim Rice — and feast their eyes on an array of exclusive photos featuring all of the aforementioned characters as well as Belle’s father, Maurice (Kevin Kline), Mrs Potts. (Emma Thompson), and Plumette (Gugu Mbatha-Raw).