Beauty and the Beast fans rejoice! Celine Dion, who performed the animated film's title song with Peabo Bryson in 1991, will also be part of the soundtrack for the live-action film.

I'm thrilled to announce that I'll be performing a new song,"How Does A Moment Last Forever" for Disney's Beauty and the Beast. - Céline 🌹 pic.twitter.com/5H7vnGPs5W

Dion announced today that she will perform "How Does a Moment Last Forever" on the film's soundtrack and over the end credits. The song, which is one of three new songs written by lyricist Tim Rice and composer Alan Menken, was previously titled "Our Song Lives On." Menken discussed the song last fall with Entertainment Weekly and revealed both Maurice and Belle sing the song at various points in the film.


“It ends up being a song called ‘Our Song Lives On,’ and it’s done in a number of forms,” says Menken of the former track. “The first time it’s sung, it’s Belle’s father singing as he’s completing a music box, and basically it’s [about], ‘How does a moment live forever? How do you hang on to precious moments?’ Then, it’s reprised by Belle, and then it’s the song that’s actually over the end credits at the end of the movie. Disney hasn’t announced it yet, but there’s going to be some wonderful singer on the end credits song."

Menken performed a version of the song during his one-man concert last September.
Disney also revealed the cover for the Beauty and the Beast deluxe edition soundtrack. The album is currently available for pre-order and set for release on March 10, 2017. 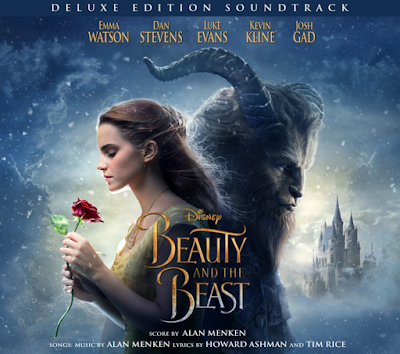 Five-time Grammy-winning and best-selling recording artist Celine Dion will perform an all-new original song, “How Does A Moment Last Forever,” for Disney’s live-action “Beauty and the Beast.” The song will also be included on the film’s soundtrack.

Written by eight-time Oscar-winning composer Alan Menken (“The Little Mermaid,” “Aladdin”) and veteran lyricist and three-time Oscar winner Tim Rice (“The Lion King,” “Evita”), “How Does A Moment Last Forever” is an emotional ballad about holding onto life’s precious moments. Portions of the song are performed throughout the film and interpolated into the underscore before Dion’s full-length version debuts in the film’s custom main-on-end title design.

Celine Dion says, “Being a part of the original ‘Beauty and the Beast’ was such a magical experience in my life, and I’m truly honored to be a part of this film again.”

President of Music for Walt Disney Studios Motion Pictures Production, Mitchell Leib, approached the artist on behalf of the project with the idea of recording one of the three new songs written for the film. “Celine was the unanimous choice of the filmmakers and studio to perform this song,” says Leib, “And everyone involved with the film is thrilled she agreed to be part of this new live-action adaptation.”

Menken also provides the film score along with new recordings of the classic songs from the animated film written by himself and Ashman. The original motion picture soundtrack will be released by Walt Disney Records on March 10, 2017.