Director Bill Condon: "...it wasn’t about reinventing like some of these recent movies have been. It was really about exploring and digging deeper..." 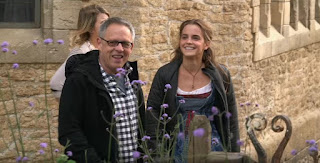 In a new interview with Nerdist, Beauty and the Beast director Bill Condon discusses the grand scope of the film and formatting it for IMAX screens.


Beauty and the Beast is specially formatted for IMAX to show 26% more image on screen. Advance tickets are now on sale and you can find your local IMAX theater here.

Director Bill Condon had just watched the entirety of Beauty and the Beast in IMAX for the first time, and to say he was impressed is an understatement. I spoke with Condon just after he viewed the live action adaptation of the 1991 animated Disney film on the extra big screen, and he said even though he knows the film and material so well, the IMAX version made him look at it in a different light. “It made me feel like I was back on those massive sets that we built. They were so big, and you just get to see more of them–that was an unbelievable thrill,” he said.

It’s a significant contrast. Condon kept the IMAX format in mind while they worked. The team looked at both aspect ratios as they filmed and planned camera moves accordingly, whether it was framing the ballroom dance between Belle and the Beast a certain way or showcasing more of the performers. Condon explained the larger image is especially excellent for their sets, which were practical. “We went completely old school for the whole movie. We maybe went on location for a day, but basically the movie was made at Shepperton [Studios] the way you would have made it in MGM in Hollywood in the 1950s,” he said, “We built this entire village with massive sets and huge stages that we connected. So, for example, you could go from the dining room of the castle and walk all the way through to the entry way, to the front stairs, and into this massive ballroom. It was really something. I think that does emerge clearly in the IMAX format.”

Trailers for the film certainly convey a grand scope, but it goes beyond the size of the sets or sweeping backgrounds. The cast has a certain scale as well. Condon said, “We have this big ensemble of musical performers who play the villagers. But again here, because of the size of the image, you just notice more. You see more people, you see more of a little story that’s happening more in the background. Suddenly it’s right there in your face.”

A couple of scenes jumped out at Condon as being particularly suited for the IMAX format. “The ballroom,” Condon said. “Being able to go in that room and have it always framed by the chandeliers, which are incredibly high in the air, always have them framing the top of the shot just adds more. Our movie is pretty much packed with beauty, but you get to see more of it and the ballroom scene is a great example.”

Many moments from the animated Beauty and the Beast, like the battle on the turrets and the iconic ballroom scene, are featured in the live action version, but this isn’t meant to be a reboot. Condon explained what they were going for: “In general, it wasn’t about reinventing like some of these recent movies have been. It was really about exploring and digging deeper, inevitably, because you’re bringing people into a live action world. My deepest hope is people see the movie and feel that the additional scenes and the additional material is stuff they always wondered about and wished had been there, so they don’t even remember what was in the animated film and what wasn’t. That it all becomes of a piece.”

Source: Nerdist
Posted by StephanieB at 10:21 AM