We've gotten a taste of Ewan McGregor singing 'Be Our Guest' and Josh Gad belting out a bit of 'Gaston' and now Luke Evans will give us a preview of what we can expect when Beauty and the Beast opens next March. 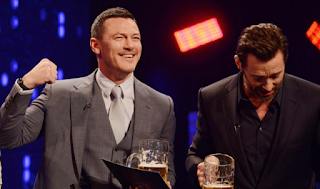 Tonight's episode of The Jonathan Ross Show on ITV features guests Luke Evans and Hugh Jackman, who previously played Gaston on stage in Australia. According to the Evening Standard, the episode, which airs later tonight, brings the two Gastons together in an impromptu performance of the character's title song.

The Jonathan Ross Show airs tonight at 9:40 pm on ITV.

Source: The Evening Standard, The Jonathan Ross Show
Posted by StephanieB at 1:11 PM