“We have Emma Watson playing Belle and this terrific cast with Emma Thompson, Ewan McGregor and Ian McKellan doing voices and being performers. It’s hard to go wrong. They’re all after the same great entertainment, good storytelling that’s appropriate for audiences today. The Beast is played by the coolest guy, Dan Stevens from Downton Abbey who I love. It’s perfect because he’s got this amazing heart for the role and he can do drama and the darker side of it too. So I just can’t say enough about the cast and the filmmakers on that one.”

Luke Evans talks Beauty and the Beast with Total Magazine


"Evans cites the 1991 Disney animation as one of his favourites due to the 'iconic' story and songs, which Condon's version will retain while adding several new toe-tappers. 'It's incredibly loyal to the story. All the music is there. I literally can't wait to see this. It's very exciting.'"


AV: Indeed, right now you’re working on the live-action film of Beauty And The Beast. Can you tell us a little about it?

MK: I’ve been working on that for over a year now, I guess. All the principal photography has been completed. Right now, we’re heading toward recording the first few songs for the film. The way we’ve been working on the film is that we record the vocals first to synth mock-ups. From that, we can change things like tempos. Obviously, when you’re in the digital realm, you can do all those things. And then we record the orchestra after that. So, we’re heading to London next month and we’re gonna have a 92-piece orchestra. Danny Troob has got the chance to re-invent his orchestrations for the existing songs. As for me, some of the most challenging, fun and rewarding things I’ve done have been to arrange the underscore for the shows that I’ve done with Alan. I’ve approached music from #1 – the dramatic point of view and #2 – the musical point of view. That’s what appeals to me so much in underscores. How do we accomplish this or that, or get from point A to point B and sound like it’s always been that way, from the dramatic, emotional point of view? And so Alan let me do this for the first time on a film, helping him write some of his underscore. So, right now I’m tackling the songs and the interstitial music on the songs. And that’s what’s occupying most of my days right now!

Emma Thompson talks Beauty and the Beast with USA Today


Thompson also stars as a German mother opposite Brendan Gleeson in the World War II drama Alone in Berlin (slated for release this year) and takes on the iconic role of Mrs. Potts in a new version of Disney’s Beauty and the Beast (out March 17, 2017) directed by Bill Condon and starring Emma Watson.

Not only does she voice the enchanted animated teapot but Thompson reports she also has a bit of live-action work, too.

“I went from playing deeply distressed German house Fraulein to porcelain,” she says with a laugh. “That was not a journey I’ve made before, frankly.”

Luke Evans on Beauty and the Beast: "It's like being in the theater. It's breathtaking."
Click here to see the full video from HeyUGuys. 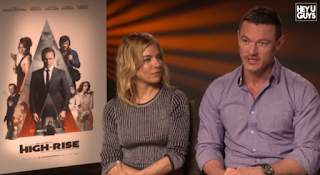