'Beauty and the Beast' News Round-Up #27 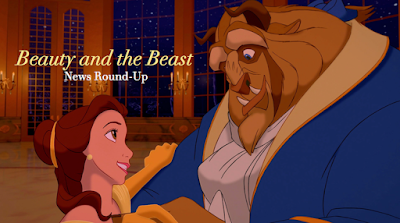 Countdown to Beauty and the Beast #7


NeueJournal: You are working on several upcoming projects, all quite different from each other. What draws your attention to a role?

Ewan McGregor: I suppose I’m always looking for some gut instinct, some reaction, some need to do it. When I read something and go, “Oh I’ve got to do that,” I’m looking for that. Also, I look for something outside of the normal or something that’s got a little edge to it. Ultimately it’s got to be a good story and a good character.

EM: That, in a way, was for the kicks and for my kids, I suppose. To play Lumiere is different from playing Jesus (laughs), maybe less of a stretch, in a way. Nonetheless, being French was quite hard work, because Disney didn’t want too much of the real French sounds, they wanted “Disney French,” so when you put “arr” in everything turned Mexican. My whole performance of Lumiere turned sort of Bajan instead of Parisian. Anyway, on the second round I got it.


What was it like working on Beauty and the Beast?
It was an amazingly intense experience, and we had some wonderful times. There was an opening number that we wrote, and it was seven minutes long. It introduces the characters and has Belle walking through the town, and Howard said, “Are we crazy? We can’t send this out.” But finally we sent it. And of course they liked it.

Were any of the songs from Beauty and the Beast particularly challenging?
We worked really hard on “Beauty and the Beast.” It’s interesting how the simplest song takes the most time and is the hardest. We wrote this song and then we did two demos: a pop one and another that was much more theatrical.

Was Angela Lansbury excited to be a part of the film?
Well, we sent the wrong demo, the pop version, to Angela Lansbury and so she at first said, “no thank you. This is not for me.” But when we sent her the movie version, she really got what we trying to create.


#tbt Me training to horseback ride for #beautyandthebeast. He threw me off his back moments later. I'm convinced "Buddy" was an antisemite.

The biggest announcement was for a Beauty and the Beast-themed area, set to open in 2020. While it’s being described as an expansion of Fantasyland, it will take up a large chunk of what was Tokyo Disneyland’s Tomorrowland. In its place will be a highly immersive mini-land, one that “will make Guests feel like they are in the film.”

The major attraction, currently unnamed, will feature next-level technology and last for a genuinely incredible 8 minutes. According to the press release, “Guests board enchanted serving dishes that dance in rhythm to the film’s well-known music and follow Belle on a romantic musical adventure inside the enchanted Castle where she dances her way into the heart of Beast, just in time to break the fateful spell.” There will also be a new shop and a new restaurant in this area of the park, although details of those have yet to be announced.

Yup, the rumors are true ... @JimCarrey and I are twins. Circa I'm not telling! #ThrowbackThursday pic.twitter.com/fcuuWGcqz6

Put your service to the test this #MothersDay with a @Disney_Family surprise.https://t.co/ZPEJ2ZQyYX

A Disney lightning round is no match for Chris Evans. See #CaptainAmericaCivilWar in theaters May 6.https://t.co/RWlX4vk2cp

The castle of the magical #BeautyAndTheBeast is now open! pic.twitter.com/SD1BNCcsWk

#BeautyAndTheBeast - actually made me feel like I ws living during those times. @TheViralFever @DisneyBATBIndia pic.twitter.com/XwIWiQi1Ko

Posted by StephanieB at 8:20 AM

Email ThisBlogThis!Share to TwitterShare to FacebookShare to Pinterest
Labels: Alan Menken, Beauty and the Beast News Round-Up, behind the scenes, Josh Gad, LeFou