Bill Condon on "Be Our Guest": "I would guess that is pretty far up there in terms of most intricate and elaborate musical numbers ever shot.” 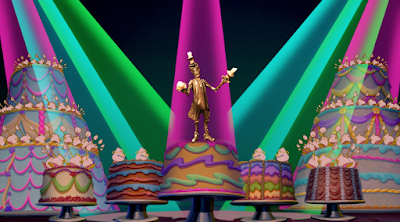 They can sing! They can dance! They can be part of a very intricate and pricy musical number!

"Be Our Guest" is one of Beauty and the Beast's shining moments and is sure to once again be a stand out number in the live-action film. Speaking with Entertainment Weekly, director Bill Condon described the sequence as "the most intricate thing [he's] ever worked on."


“Well, it’s interesting to do what is going to be our biggest musical number with nobody there, except for some cutaways to Belle. It’s a four-minute number that cost more than Mr. Holmes’ entire budget. We shot it with first and second unit for over a month and it’s taken over a year to put it together — and six months before that to plan it. I would guess that is pretty far up there in terms of most intricate and elaborate musical numbers ever shot.”

Anthony Van Laast took on the challenge of creating choreography for the enchanted object.


The sequence’s dancing was overseen by Beauty and the Beast choreographer Anthony Van Laast (Mamma Mia!), who admits it hadn’t occurred to him that he would be designing dance-steps for a candelabra, a clock, and a teapot, among other objects, when he took the job. “The biggest challenge has been doing the choreography for the animation, which I hadn’t really thought about when Bill approached me,” he says. “I’d never really thought about [it]. I mean, I’d seen a hundred animation films before but I’d never really thought that some choreographer had put it all together. Of course, a choreographer put it all together! So suddenly there I am with ‘Be Our Guest,’ and I’m thinking, God, this is a huge number to choreograph, using animation. Then we started talking about pre-views, and I had no idea what a pre-view was!”

Sorry, do you mean, pre-viz? “Pre-viz!” he laughs. “See, I can’t even say it! I didn’t know what it was, so I went on a little course to learn about pre-viz, and then we’ve done all of the choreography for ‘Be Our Guest’ using pre-viz, and using motion capture, and me choreographing things on dancers, and then transferring that onto various characters. The teapot is limited in the way that they don’t have any legs. But Lumière is a full mover, so we’re choreographing Lumière, we’re choreographing Plumette. We’ve got these wonderful sort of flying sequences going into Esther Williams patterns.”

Ewan McGregor, who plays Lumiere in the film, was not as enchanted by the experience of doing motion capture for the sequence.


“It’s not very graceful doing mo-cap. You’re dressed in a skintight suit with balls stuck all over you and you’ve got to wear a very stupid hat. It’s not your proudest moment. And, of course, everyone wants to come and watch, so there’s like 50 people standing behind the camera. [Laughs] I had to say, ‘Look, I can’t do it, you’ve got to get everyone out!’”

After all that, Emma Watson (Belle) says all the hullabaloo was "worth it in the end."


“It was really just very technical, and because it was so technical, really sort of painstaking,” says Watson. “Yeah, it was tricky. But I think it looks spectacular, and it all paid off — so all worth it in the end!”

Source: Entertainment Weekly
Posted by StephanieB at 12:09 AM