It's not easy being green, or in Ewan McGregor's case, it's not easy being a suave French candelabra. In a new interview with Entertainment Weekly, McGregor, who plays Lumiere in Beauty and the Beast, spoke about his return to movie musicals and the difficulties he faced taking on the character's signature French accent.

“I’ve got four girls. My eldest is in her twenties now, of course, but still I’ve got a little one, who’s 5, and when an opportunity like this comes along, to be in a film they will watch, then it’s nice. It’s nice to get the opportunity to sing again in a film. It’s been a long time since I got the chance to do a big number, like I had the opportunity [to do] in Moulin Rouge. And I get this great number, ‘Be Our Guest,’ which Lumière sings.” 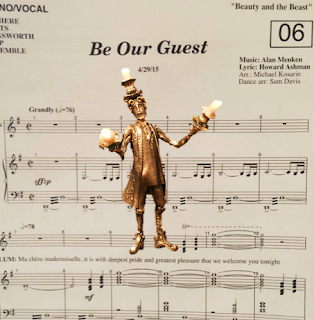 “When they were shooting, they wanted to have all of our voices to act with, so Emma and Darren had characters to work with — that being our voices,” says the actor. “So, we went to London, we did some very quick accent-coaching [laughs], which in my case didn’t work out terribly well. My French didn’t really sound very French to begin with — it sounded a bit Spanish or something. And then some time later, I went over to New York, where Bill Condon [the film’s director] was doing all his post-production and I recorded the whole part again. I’d done a bit more work on the accent, so it sounded more French and I got rerecord the song. So, I got to do my whole performance again, which was a really nice opportunity. You don’t often get offered that. But I got a chance to have another crack at all of it!”

Check out the full Beauty and the Beast first look article from Entertainment Weekly here.

Source: Entertainment Weekly
Posted by StephanieB at 5:52 AM