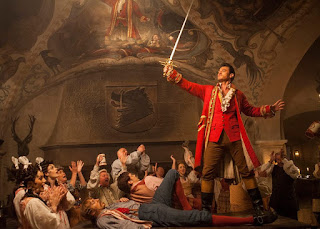 When I was a kid, I knew I liked the music in Beauty and the Beast and that simple fact was good enough for me, but as an adult, I can now appreciate the wonder and brilliance of Howard Ashman's lyrics. After Ashman's passing in early 1991, it was lyricist Tim Rice who worked with composer Alan Menken to bring new music to the Broadway production of Beauty and the Beast and next year's live-action adaptation. However, with a little bit of pixie dust, which Disney has an excess of, previously unused lyrics from Ashman will also be featured in the live-action film.

Entertainment Weekly reports these new lyrics will mostly be featured in "Gaston," and will add "an extra freshness to the movie."


“In ‘Gaston,’ we had a treasure trove of lyrics that Howard had written that we did not put in the movie,” Alan Menken tells EW. “In many cases they were a little bit risqué — not risqué sexually, but risqué in terms of sensibility. We all felt ready to have these lyrics. When Bill found out about those lyrics, he said, ‘Oh my god, can we please look at that, because it would be a wonderful way to add an extra freshness to the movie.’ So, yes, you’re going to hear some unheard Howard Ashman lyrics.”

“The guys at Disney reviewed all the transcripts and recordings and they’ve been able to go back through those hours and hours of recorded footage and listen to lyrics that were written and never used, which are actually gems,” Luke Evans, who plays Gaston in the live-action version and performs the character’s self-titled song, says. “So, for the [audience members] who know the songs immensely well, which I think is most people, you will hear a few new lines, which are really, really special.”

Director Bill Condon added that another Ashman lyric will appear later in the film, but kept mum on more details.


“It’s a surprise at the end,” the filmmaker says. “I don’t want to give that away, but it’s a really gorgeous lyric that we found.”


Source: Entertainment Weekly
Posted by StephanieB at 6:10 AM