Director Bill Condon: "Watson and Stevens dancing to 'Beauty and the Beast.' That really puts you on a high.” 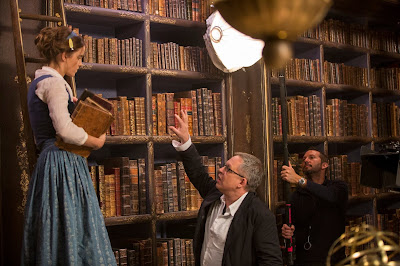 “I hope you feel like when Belle is crying over The Beast and says that she loves him, that you really feel that you’re convinced that these two people are the only ones for each other, that they belong together. That’s why we expanded the backstory and all so that you have something that lets you really believe in that love and feel it and feel that kind of sadness of it.”

In a new interview with Grazia, director Bill Condon discusses working with the cast of Beauty and the Beast, the challenges of filming "Be Our Guest," and Disney's reservations about making a live-action musical of their animated classic.

GRAZIA: Beauty and the Beast is one of the most anticipated films of next year. When you first approached Disney with the concept of the film being a musical, the studio was apprehensive. You famously said, “With all due respect, I think you're crazy. You're going to spend all this time making a huge, gorgeous live-action Beauty and the Beast and not do Be Our Guest?” What exactly were their reservations? You have been credited with reviving the film-musical genre after all…

Condon: [Laughs]. I think they had questions over how musical it was going to be. I think that is still a question mark with audiences and things like that. But I think, it was pretty clear. Everyone knows how beloved this movie is but also how beloved the music is. You know, you look at it and there’s not one of those songs that isn’t a classic. There wasn’t any question about skipping over any of them. But what was fun was that in the course of devising an expanded story, we needed some more and I think it’s really great that we have ones that fit in very well with the older ones.

Emma Roberts, Kristen Stewart, there’s a few names were floating around the internet about who was going to be cast as Belle. How did you arrive at Emma Watson?

Yeah, I’ve never heard of those other names! [Laughs] You know what it was? Belle is famously the first modern Disney heroine so here you are 25 years later and who best captures those specific qualities of Belle – her brains, how strong she is, how independent she is, how misunderstood she is – it just felt like Emma Watson, in both her performances and how she lives her life, it felt like a great 21st century version of that. And then, on top of that, to hear how much she loved Beauty And The Beast and that she could sing and dance, well, that’s it, right?

What was Watson like to work with on set?

Emma Watson is incredibly serious I have to say. It reminded me of working with Eddie Murphy in Dreamgirls, actually. You know where’s there’s that kind of light that goes on and she makes it look effortless but that’s the result of a lot of training and a lot of hard work. I was always impressed by that and just how dedicated she is and always filled with great ideas. On top of that, she’s also almost emotionally translucent, you know? It was sort of fun to watch shot by shot and take by take just how focused she is.

There’s a lot media focus on Belle’s alleged changing backstory in this film but then I’ve read an interview with you where you’ve said, it’s not so much changing the story as it is about making connections and answering questions in the plotlines. Did filming with Watson – in her brains and creativeness as a performer - play any role in adding to the backstory.

Not with the backstory, no. But it’s a process I like, all the actors sit around and we go through the script and discuss every scene and we dig a little deeper and people suggest ways of doing certain things. So everyone contributed to each character but the backstory was something we devised.

How important was it to stay as close to the original film for you?

Very. It was the perfect movie so I think its so important not to reinvent the wheel just for the sake of it. As you would take something and put it onto a stage, it’s truly putting it into a different medium.

Was there any particular scene where you went home one night and just couldn’t stop thinking about?

Oh wow… It was one of the first scenes we filmed...the ballroom scene. Watson and Stevens dancing to Beauty and the Beast. That really puts you on a high.”

You’ve worked with across so many genres of film, was there any particular unique challenge you found making this one?

Oh that’s a good question! The scenes where there are few or no human beings, for example during the song Be Our Guest, it’s a big production number where Emma is the only human. Basically [when filming] you’re imagining everything else, so the amount of previewing and preparation that was involved wasn’t unlike things I’ve done before, but it was at a different level of intensity and complexity. We had these legendary theatrical lighting designers who were lighting reflections in the room off of objects that didn’t exist. That’s the kind of thing which sort of gets your brain deranged.

Dan Stevens, what drew you to him?

Well I had worked with Dan in a smallish part in [Julian Assange and WikiLeaks film] The Fifth Estate, so I had kind of just been impressed by what a wonderful actor he is, and since then he worked with people and you start to really follow what they’re up to and he’d done some small movies where he played not-at-all-romantic heartthrob parts that Downton Abbey would have suggested, so I knew that there was this darker side to him that he was in touch with and I knew that knowing him that he had a goofy side too and again finding out that he could sing as well as he could feels like ‘Boy, all those boxes are being checked you know?’

I just think he’s a great actor. I have to say that one of the most important things about the actor playing The Beast was that they had to be open to the very, very, complicated technological approach where they would have to give the performance on the set and then duplicate it on a machine at night. Dan not only embraced it but got into it, the challenge of it became interesting to him. So again, I’ll always be grateful that he decided to do this.”

“Well you know, you’re in a small room with him and suddenly he starts singing and it’s again, that combination of quality, he’s so handsome, so funny, a little goofy too, and you know what he has that seems to be essential in something like this? It’s even when he’s singing Kill The Beast, you get that joy of someone that has this talent; this huge, great, rich voice, that he’s sharing with you and I think that that’s the essence of musicals. It’s the joy of performing, and he has that like crazy.”