When Beauty and the Beast is released in March, fans will be treated to three new songs from composer Alan Menken and Tim Rice, previously unused Howard Ashman lyrics in "Gaston," and a new overture from Menken.


According to The El Capitan Theatre: 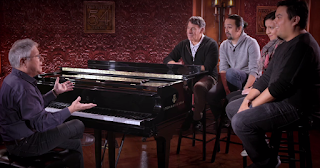 The brand-new BEAUTY AND THE BEAST overture, arranged by Alan Menken's long-time music director Michael Kosarin in the style and tradition of the great 1950’s film overtures, was originally recorded by a 100-piece symphonic studio orchestra, and takes us through the songs we loved best from the 1991 animated film, as well as some of the gorgeous new songs written for this live-action one.

Source: El Capitan Theatre, @beautyandthebeastfilm
Posted by StephanieB at 10:43 AM