It all started with "once upon a time..." and twenty five years later Beauty and the Beast continues to enchant audiences with its tale of magic spells and a prince in disguise! Disney has been celebrating with anniversary screenings and a Blu-ray release of the film and now its our turn to be part of the excitement.

Beauty and the Beast Movie News will host a tweet-along later this month to commemorate the animated classic's 25th anniversary. The event will begin at 9pm EST /6pm EST on Friday, September 23rd. To join in, simply begin watching the film at one of the above times (or the equivalent time in your area) and follow along @batbmovienews or #BATBTweetAlong on Twitter. We will be sharing trivia, behind the scenes videos, and more throughout the night. 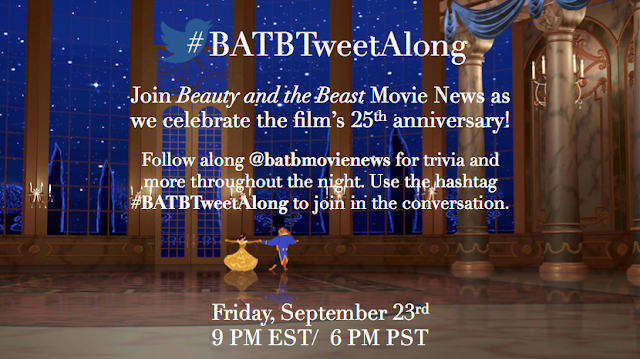 Posted by StephanieB at 8:15 PM