One year ago...production begins on 'Beauty and the Beast'

Lights, camera, action! One year ago today, principal photography began on Beauty and the Beast in London. Over the next few months, fans were treated to the tiniest look behind the scenes with Disney's official Snapchat, as well as a few photos and tweets from the cast on set. Several cast members, including Josh Gad (Le Fou) and Ewan McGregor (Lumiere), also commented on the film while promoting other projects last summer, with McGregor describing his time on set as "fantastic fun." Director Bill Condon also spoke about the film, acknowledging the importance of the animated classic and its characters to fans and praising star Emma Watson (Belle) as "a beautiful singer, a wonderful dancer."

Stars Emma Watson and Luke Evans (Gaston) wrapped filming in late August 2015 with principal photography coming to a close that same month. Beauty and the Beast is now in post-production, with composer Alan Meken hard at work on the film's score and the studio already test screening the film, with audience reception being "nothing short of extraordinary.”


Cameras are rolling in London. 🎥 #DirectedbyBillCondon #Disney #BeautyandtheBeast #taleasoldastime 🌹 Art by @mrbruceyan
A photo posted by Jack Morrissey (@therealjackmorrissey) on May 18, 2015 at 1:42pm PDT

@Beauty_BeastFR Bill Condon is ready, and this is what matters most.
— Jack Morrissey (@Jack_Morrissey) May 17, 2015


Yesterday, I walked onto a ballroom out of my childhood & saw Belle waltz w/a Beast. Get ready for magic people #BatB pic.twitter.com/cGsdh9nvux
— Josh Gad (@joshgad) May 28, 2015


According to Menken, he and Tim Rice wrote three new songs for the film, including "Forever More" and "Days in the Sun." The first is sung by the Beast and Menken described the second as a lullaby sung by the enchanted objects. While many fans speculated songs from the Broadway production, specifically "Home" and "If I Can't Love Her," would be featured, Menken confirmed no songs from the stage show will be part of the live-action film.

June 11, 2015- Bill Condon discusses working with Emma Watson on Beauty and the Beast


When Broadway meets Beaut-tay. #audramcdonald and I making doe eyes. #beautyandthebeast
A photo posted by Josh Gad (@joshgad) on Jun 19, 2015 at 4:06pm PDT 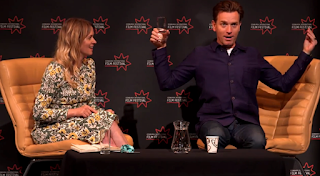 Danced like a lunatic for 2 days straight. @TheRealLukevans thank u 4 being an amazing partner & Epsom salts, thank u 4 being my best friend
— Josh Gad (@joshgad) June 23, 2015

June 24-26, 2015- Ewan McGregor sings "Be Our Guest' at the Edinburgh International Film Festival and on The Graham Norton Show


Very green tree, lit up by the huge lights on our night shoot last night. #BATB
A photo posted by thereallukevans (@thereallukeevans) on Jul 15, 2015 at 12:41pm PDT

#BATB #momentsinnightshoots
A photo posted by thereallukevans (@thereallukeevans) on Jul 18, 2015 at 5:01am PDT

"If you go down to the woods today, you're in for big surprise" Well, a huge crew, huge cranes, huge lights, oh and some Disney characters...
A photo posted by thereallukevans (@thereallukeevans) on Jul 20, 2015 at 3:41pm PDT


That a wrap for me on #BeautyAndTheBeast!!! Can't wait to share the magic we have cooked up for you. pic.twitter.com/2PuyAI2RUs
— Josh Gad (@joshgad) July 27, 2015

July 29, 2015- New Snapchat video from the set with Luke Evans and Josh Gad


Another long day on set of #BATB. now off to gym for #3SECONDS #tiredbutlovingit
A photo posted by thereallukevans (@thereallukeevans) on Aug 6, 2015 at 10:54am PDT


#howtotakeaselfiewithoutgivnganythingaway #BATB
A photo posted by thereallukevans (@thereallukeevans) on Aug 12, 2015 at 11:48pm PDT

Luke Evans and Josh Gad also appear in the video message, and sing the Gaston song. #BeautyAndTheBeast #D23Expo
— Inside the Magic (@InsideTheMagic) August 15, 2015

August 26- Production wraps on Beauty and the Beast

Bill Condon: "It’s an important movie to a lot of people."

Ewan McGregor: "It was great fun."

Bill Condon: "You will believe a beast can waltz."

Audra McDonald: "Bill Condon is creating something quite beautiful."

Josh Gad: "Luke is going to blow people away."

Posted by StephanieB at 4:11 PM